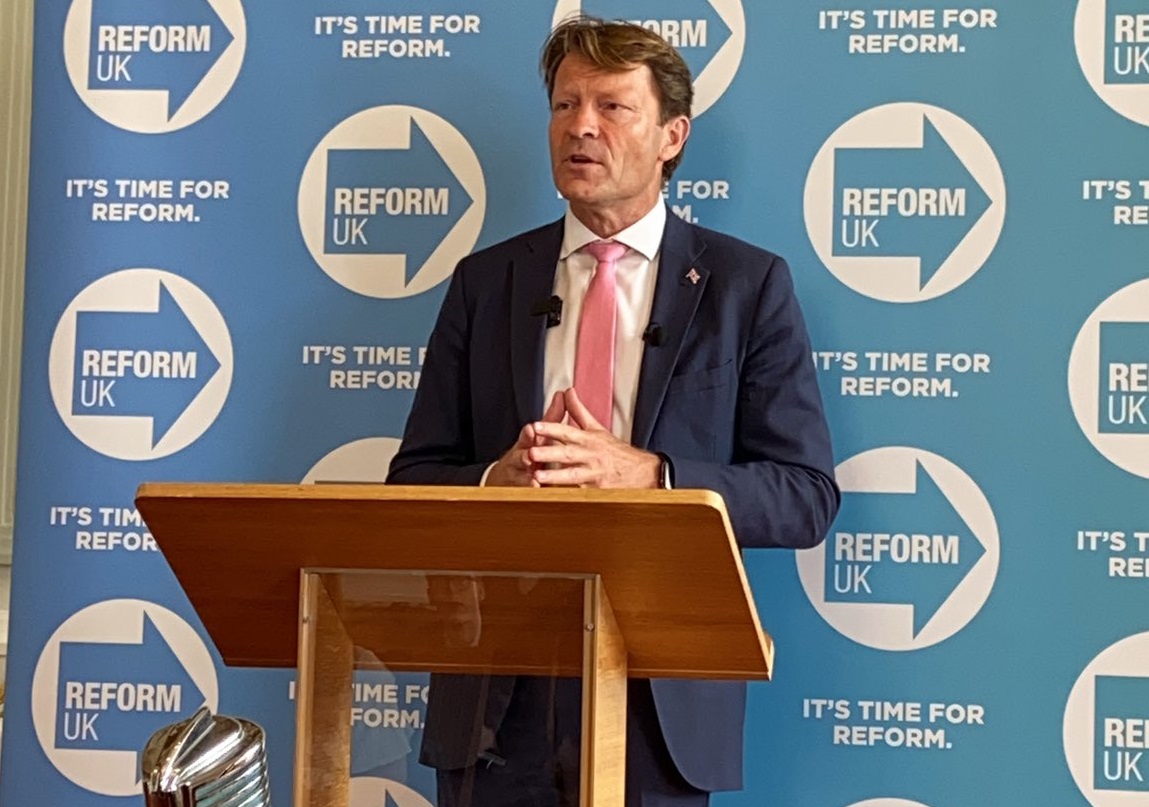 The leader of Reform UK has claimed that Metro Bank shut down the party’s bank account after political pressure was exerted upon the organisation.

Richard Tice, 56, said: “This is without question, in my mind, the result of political pressure.”

The ex-businessman also told journalists at a press conference in Westminster this morning that he had “never once” encountered a similar experience during his business career.

Mr Tice warned that, if Reform UK could not sort out a similar banking arrangement, it could wreak havoc for the party’s electoral chances.

The former MEP said: “If we can’t have clearing bank facilities, we can’t pay bills and therefore we can’t stand candidates.”

However, Mr Tice was unaware as to who might have put pressure on Metro Bank – although he did appear at one point to suggest that the Conservative Party may be responsible.

“I wish I knew – I have no idea. But it is so extraordinary, so unprecedented, so unusual,” he said.

Live @TiceRichard speaking about Metro Bank closing @reformparty_uk with 60 days notice:
“This is unusual and unprecedented. In 30+ years of being in business, not one bank has terminated an account. It is without question, in my mind, a result of political pressure”

Instead, the Reform UK leader said: “Someone, somewhere, somehow has applied pressure.”

“We’ve got big plans,” Mr Tice claimed, “and the bank should be reassured – after all we are regulated and monitored and supervised by the Electoral Commission to ensure we are squeaky clean.”

Despite the party leader’s claims, however, he was unable to provide evidence for them.

The 56-year-old told journalists: “I just know from my experience being involved in so many banking arrangements over such a long period of time that this doesn’t happen – this is not normal.

“I’m going to write to the Governor of the Bank Of England to ask the bank itself for clearing bank facilities.”

The ex-Tory Party donor also appeared to suggest that Reform UK’s opposition to the Government’s strategy could explain why the bank suspended the party’s account.

But Mr Tice refused to confirm whether he believes the Conservative Party were definitely behind the move, saying it was impossible to know for sure.

He said: “I don’t know who it is – it may not be the Conservative Party, but let me be clear … our economic plan is clearly what would naturally be a conservative plan as people focus on the next general election,” he told attendees of the press conference.

He added that his party were capable of nabbing votes from the Tories.

He warned the Prime Minister: “If we take support from the Tories, then all of a sudden that [Johnson] gap [over Starmer] closes.”

After denouncing Boris Johnson’s Conservative Party as the “Con-Socialists”, who would introduce “Austerity Mark 2”, Mr Tice set out his own party’s position.

Mr Tice also shed some light on Reform UK’s electoral strategy for the upcoming General Election, which is currently set to be held in 2024.

The leader of Britain’s fifth-largest party said that Reform UK already had 200 candidates ready and added that they intend to contest over 500 constituencies.