The Government’s Law Officer for Scotland has resigned over the controversial Internal Market Bill.

Lord Keen was appointed to the role of Advocate General for Scotland in 2015. He was also appointed as the Chairman of the Scottish Conservative Party in 2013.

It is understood in Westminster that Lord Keen resigned due to disagreements surrounding the legality of the Bill. The Bill has caused a revolt in the Tory Party due to perceptions that it has the potential to break the Withdrawal Agreement with the EU passed earlier this year.

However, this did not stop the Internal Market Bill being passed in Parliament on Monday evening, by 340 votes to 263.

Lord Keen had sent a letter to Boris Johnson earlier today, which was originally rejected. However, following talks, Lord Keen’s letter of resignation was accepted.

Lord Keen wrote in his letter: “Over the past week, I have found it increasingly difficult to reconcile what I consider to be my obligations as a Law Officer with your policy intentions with respect to the UKIM Bill. I have endeavoured to identify a respectable argument for the provisions at clauses 42 to 45 of the Bill, but it is now clear that this will not meet your policy intentions.”

A Downing Street spokesperson said: “The Prime Minister thanks him for his service.”

It comes as the Foreign Secretary arrived in the United States of America today to settle concerns about the Government’s controversial Internal Market Bill.

Dominic Raab is set to meet members of Congress after there were threats that, should the UK break the Withdrawal Agreement or the Good Friday Agreement, they would refuse to pass a trade deal with the UK.

The most notable condemnation came from the Speaker of the House of Representatives, Democrat Nancy Pelosi, who said there would be no chance of a trade agreement being passed if the UK Government continued on its current course.

“The UK must respect the Northern Ireland Protocol as signed with the EU to ensure the free flow of goods across the border.

“If the UK violates that international treaty and Brexit undermines the Good Friday accord, there will be absolutely no chance of a US-UK trade agreement passing the Congress.”

In addition to Nancy Pelosi, four congressmen wrote to Boris Johnson with similar qualms. Democratic congressmen Eliot Engel, Richard Neal and Bill Keating, as well as Republican Congressman Peter King, wrote in letter that the Internal Market Bill could have “disastrous consequences for the Good Friday Agreement and broader process to maintain peace on the island of Ireland”.

“We therefore urge you to abandon any and all legally questionable and unfair efforts to flout the Northern Ireland Protocol of the Withdrawal Agreement and look to ensure that Brexit negotiations do not undermine the decades of progress to bring peace to Northern Ireland.”

The Government maintains that there will be no hard border in Ireland, and that this Bill is only a safety net.

Mr Raab is also set to meet Secretary of State Mike Pompeo during his visit. 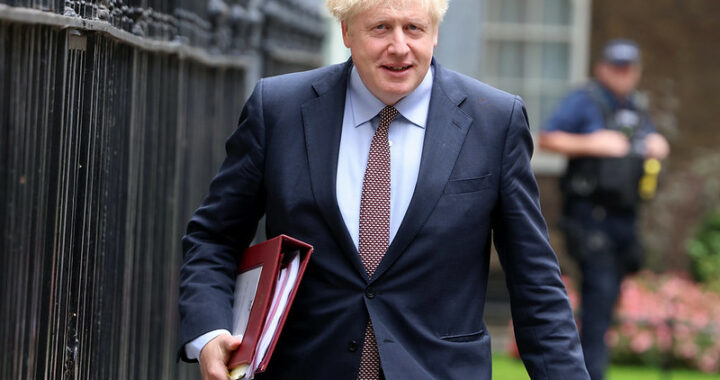