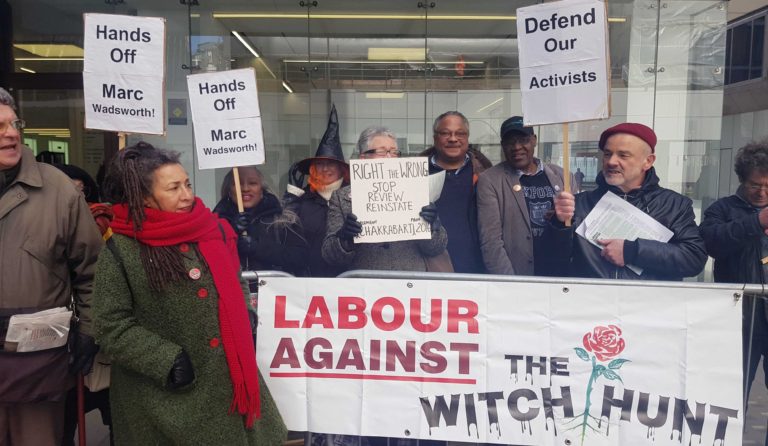 Members of the far-left organisation Labour Against the Witch-Hunt, which campaigns to put an end to the wave of suspensions and expulsions of Labour Party members by the current leadership, have vowed to continue their cause – possibly even forming a new party – during an emergency meeting held on Saturday evening via Zoom.

The group is one of four that were officially proscribed by the party following a vote at an NEC meeting last Tuesday.  The Mirror reported that the party was considering proscription last weekend.

Steering Committee member Stan Keable instructed the group’s members to lie if asked about their membership of any proscribed organisations, with one member commenting in response that “some people deserve to be lied to”.

Number of Labour members Starmer is set to expel

One member of the Steering Committee who chaired the meeting, expelled former party member Tina Werkmann, said that the group now had “just under 500 members” (although there have been far more suspensions and expulsions), with 80 new members joining in the past few days.  She said at the start of the meeting that the NEC’s decision “proves the point that we have been a thorn in the side of the Labour Party Right, and we should take that as a compliment”, urging members to “keep on fighting”.

The group’s Steering Committee insisted to members present on the Zoom call, attended by over 100 members, that the Labour Party had no access to its membership lists.  One member on this call who did choose to give their real name, however, was Peter Cave.

Another member who did not appear on this call, but has appeared on previous calls, is Norman Thomas, currently the suspended CLP Chair for South Thanet.  Moshé Machover, a Professor of Philosophy at the University of London, is another member of the group who appeared on the call, having previously been expelled from the Labour Party in October 2017, but later readmitted.

Mr Machover accused Labour Party leader Sir Keir Starmer of “pandering directly to the establishment”, instead of to “a perceived electorate”, and suggested that the party could well collapse entirely under his leadership.

She added that in her view, however, various right-wing factions within the party did in fact do exactly this under Jeremy Corbyn’s leadership, but had not been proscribed.  She also encouraged members who had not yet been expelled to “stay and fight, and make sure that the next time we get as close to the levers of power in the Labour Party as Corbyn did, we will not be tempted to appease the Right, but fight them with everything we have”.

But another proscribed group, the Labour In Exile Network – which is run by many of the same people as Labour Against the Witch-Hunt – has indeed begun organising ‘Shadow CLPs’, which are alternative structures designed to replicate local Labour Party organisations for those who have been suspended or expelled, and expressed a desire to print their own membership cards.

The Labour Party Rule Book specifically states that any member who “joins and/or supports a political organisation other than an official Labour group or other unit of the Party” will be expelled automatically.

Roger Silverman, a suspended former party member from Newham, said that “Labour was the biggest party in Europe under Corbyn – the biggest party in Britain today is the Ex-Labour Party”.  He related that 5,000 former members in East Ham and West Ham had formed a new organisation known as ‘Newham Socialist Labour’.  He said this was now actively campaigning in the area, suggesting that “similar processes are happening all over the country”, and that “a new party is coming into creation”.

The group has previously appeared to support taking “direct action” against the Labour Party, including disrupting its meetings – an approach apparently endorsed in the past by another member of the Steering Committee, expelled former party member Tony Greenstein. 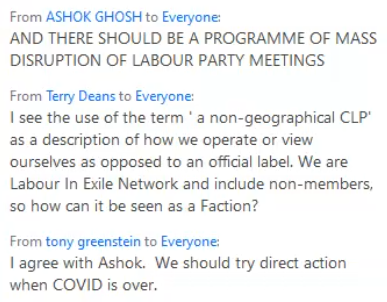 Mr Greenstein also said on Saturday’s call that one of the group’s tasks would be to “put maximum pressure on Momentum in particular … to actually start accepting and understanding what the Starmer regime is about”.

Several other speakers also supported the notion of forming a new radical-left party as an alternative to Labour, with one contributor making the suggestion of “forcing” Jeremy Corbyn to do so and lead it.

The group will be organising an event called Resist!, to be held in Brighton in parallel with the Labour Party Conference, as a ‘counter-Conference’.  Several of the proscribed organisations have also formed a new initiative called Defend the Left in protest.

It also voted through a motion to consider merging the two organisations of Labour Against the Witch-Hunt and the Labour In Exile Network together during this meeting.

The Labour Party did not respond to a request for comment.