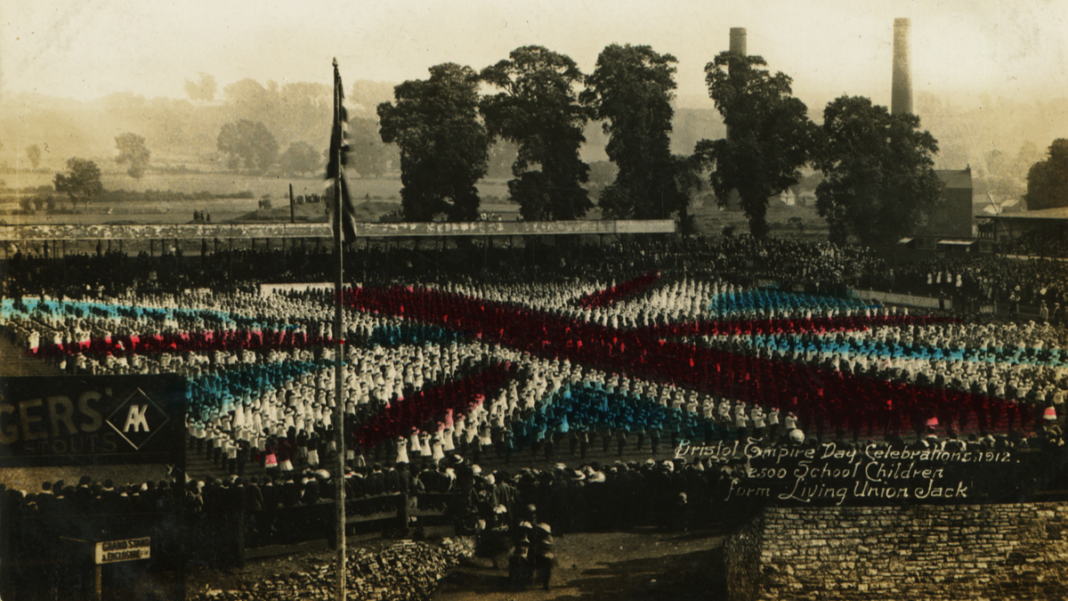 The British Empire – a brief history over time

Everything that is currently wrong in the world seems to be the fault of the British Empire. But what was the British Empire? How did it start? What countries were involved? The following is an extremely brief history of expansion, not morality. I am not a historian – I am a Googler.

The foundations of the British Empire were laid in 1496. King Henry VII of England commissioned John Cabot to lead a voyage to discover a route to Asia, via the North Atlantic. Cabot made landfall on the coast of Newfoundland, Canada. Like Columbus a few years earlier, he believed he had reached Asia. There was no attempt to found a colony. He led another voyage to the Americas the following year and disappeared.

England established its first overseas colony in the 1550s in Ireland by settling it with Protestants from England.

In 1578, Queen Elizabeth I granted a patent to Humphrey Gilbert for overseas exploration. In 1583, he formally claimed the harbour of the island of Newfoundland. Gilbert did not survive the return journey to England. He was succeeded by his half-brother, Walter Raleigh. Raleigh founded the Roanoke Colony on the coast of North Carolina, but a lack of supplies caused the colony to fail. The Treaty of London in 1604 ended hostilities with Spain. English attention now shifted to establishing its own overseas colonies.

The Caribbean initially provided England’s most important and lucrative colonies. An attempt to establish colonies in Guiana, St Lucia and Grenada all failed. Settlements were successful in the 1620s in St. Kitts, Barbados and Nevis. Slaves were purchased from Dutch ships to work on the sugar plantations. To ensure profits, Parliament decreed in 1651 that only English ships would be allowed to ply their trade in English colonies. The British entered the slave trade, which led to the Anglo-Dutch Wars. In 1655, England annexed the island of Jamaica from the Spanish, and in 1666 colonised the Bahamas.

England’s first permanent settlement in the Americas was founded in 1607 in Jamestown, managed by the Virginia Company. Bermuda was claimed as a result of a 1609 shipwreck. The Virginia Company’s charter was revoked in 1624. Direct control of Virginia was assumed by the Crown. In 1620, Plymouth was founded as a haven for Puritan religious separatists, later known as the Pilgrims. In the 1630s, Maryland, Rhode Island and Connecticut became colonies. The Province of Carolina was founded in 1663. In 1664, England gained control of the Dutch colony of New Netherland, renaming it New York. In 1681, the colony of Pennsylvania was founded. The American colonies were less financially successful than those in the Caribbean.

In 1670, Charles II incorporated the Hudson’s Bay Company by Royal Charter. It was granted a monopoly on the fur trade in the area known as Rupert’s Land in Canada.

In 1695, the Parliament of Scotland granted a charter to the Company of Scotland, which established a settlement in Panama. Surrounded by Spanish colonies and afflicted by malaria, the colony was abandoned two years later. The scheme was a financial disaster for Scotland and ended Scottish hopes of establishing its own overseas empire.

The signing of the Treaty of Paris in 1763 had important consequences for the future of the British Empire. France recognised British claims to Rupert’s Land and ceded New France (French Canada) to Britain. Spain ceded Florida to Britain.

During the 1760s and 1770s, relations between the American Colonies and Britain became strained, mainly due to resentment of the British to govern and tax American colonists without their consent – “no taxation without representation”. Britain sent troops to impose direct rule, which led to the American War of Independence in 1775. In 1776, the United States declared independence.

American independence influenced British policy in Canada. The Constitutional Act of 1791 created the provinces of Upper Canada (English-speaking) and Lower Canada (French-speaking). The aim was to defuse tensions between the French and British communities. Another aim was to stop popular control of the government, which was thought to have led to the American Revolution.

At the end of the 16th century, England and the Netherlands began to challenge Portugal’s monopoly of the spice trade by creating the East India Company and the Dutch East India Company. The Anglo-Dutch Wars of the 17th century left the Dutch with a stronger position in Asia. Hostilities between the two nations ceased after the Dutchman William of Orange became King of England. A deal between the two nations left the spice trade to the Netherlands and the textiles industry of India to England. Robert Clive’s victory at the Battle of Plassey established the East India Company as a military power.

The East India Company drove the expansion of the British Empire in Asia. The Company’s army, with the support of the Royal Navy, forced the French from Egypt in 1799, as well as the capture of Java from the Netherlands in 1811, the acquisition of Penang Island in 1786, Singapore in 1819 and Malacca in 1824, and the defeat of Burma in 1826.

The Company had been engaged in the opium export trade to China since the 1730s. In 1839, the confiscation by the Chinese authorities of 20,000 chests of opium led Britain to attack China in the First Opium War. This resulted in the seizure of Hong Kong Island and other Treaty Ports, including Shanghai.

During the late 18th and early 19th centuries, the British Crown began to assume an increasing role in the affairs of the Company. The Company’s eventual end was precipitated by the Indian Rebellion in 1857. The following year, the British government dissolved the Company and assumed direct control over India through the Government of India Act 1858. India became the Empire’s most valuable possession – the jewel in its crown.

The coast of Australia had been discovered by the Dutch in 1606, but there was no attempt to colonise it. In 1770, James Cook charted the eastern coast while on a scientific voyage. He claimed the continent for Britain and named it New South Wales. In 1787, the first shipment of convicts set sail for Botany Bay. Britain continued to transport convicts to Australia until 1868. The colonies became profitable exporters of wool and gold.

Cook claimed both the North and South islands of New Zealand for the British Crown in 1769 and 1770 respectively. European settlement increased through the early 19th century, with numerous trading stations established. In 1839, the New Zealand Company announced plans to buy large tracts of land and establish colonies in New Zealand. On 6 February 1840, Captain William Hobson and around 40 Maori chiefs signed the Treaty of Waitangi. This treaty is considered to be New Zealand’s founding document.

The Dutch East India Company had founded the Cape Colony on the southern tip of Africa in 1652. Britain formally acquired the colony and its large Boer population in 1806. British immigration began to rise after 1820 and pushed thousands of Boers northwards to create their own independent republics. The Boers established two republics, the Transvaal Republic and the Orange Free State. In 1902, Britain occupied both republics, concluding a treaty with the republics following the Second Boer War.

In 1869, the Suez Canal opened under Napoleon III. In 1875, the British bought 44 a percent shareholding in the Suez Canal for £4 million. Joint Anglo-French financial control over Egypt ended in outright British occupation in 1882.

Cecil Rhodes pioneered the British expansion in Southern Africa. His dream was a ‘Cape to Cairo’ railway, linking the Suez Canal to the south of the continent. During the 1880s and 1890s, Rhodes annexed and occupied many territories. Rhodesia, as it then was, was named after him.

In 1701, England, Portugal and the Netherlands sided with the Holy Roman Empire against Spain and France in the War of the Spanish Succession, which lasted for thirteen years. The British Empire gained Newfoundland and Acadia from France, and Gibraltar and Menorca from Spain. Spain ceded the rights to the African slave trade with Spanish America to Britain.

Napoleonic France was finally defeated by a coalition of European armies in 1815, with Britain making some gains from the peace treaty signed. France ceded the Ionian Islands, Malta, Mauritius, St Lucia, Seychelles and Tobago. Spain ceded Trinidad. The Netherlands ceded Guyana and the Cape Colony. Britain returned Guadeloupe, Martinique, French Guiana, and Réunion to France, and Java and Suriname to the Netherlands. Britain gained control of Sri Lanka and Heligoland.

At the end of WWI, the Treaty of Versailles was signed. The colonies of Germany and the Ottoman Empire were shared out among the victors. Britain gained control of Palestine, Transjordan, Iraq, parts of Cameroon and Togoland, and Tanganyika. South Africa gained South-West Africa (Namibia), Australia gained New Guinea and New Zealand gained Western Samoa. The Empire had reached its peak.

The British North America Act 1867 created modern-day Canada. Australia gained independence in 1901, and New Zealand in 1931. The Irish War of Independence ended in 1921 and the Irish Free State was born the following year.

The transfer of Hong Kong to China in 1997 was seen as the end of the British Empire.

At its height, the British Empire was the largest empire in history. For over a century, it was the major world power. By 1913, the Empire held sway over 412 million people – 23% of the world’s population. It covered some 13,700,000 square miles – 24% of the Earth’s total land area. As a result, its constitutional, legal, linguistic and cultural legacy is widespread. At the peak of its power, it was described as ‘the empire on which the sun never sets’, for the sun was always shining on at least one of its territories.

A brief history of the British Empire – Nick Buckley MBE