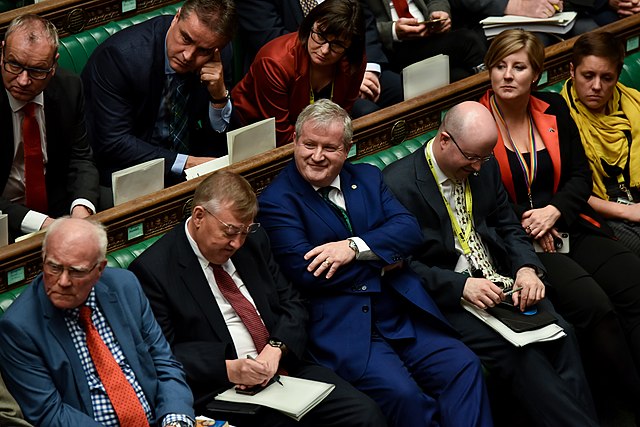 The SNP’s Parliamentary Leader, Ian Blackford, has repeated his calls for the Brexit transition period to be delayed past this year’s deadline. It comes as the UK commences trade talks with the US this week.

Ian Blackford has written to the opposition parties in Parliament asking them to push for a further two-year extension to the transition period, in light of the recent coronavirus pandemic. In his letter, Mr Blackford said: “It is right that all other political agendas are paused as we deal with the priority of saving lives and protecting people’s incomes.

“In that context, I believe now is the right moment to unite as opposition parties in Westminster in seeking a two-year extension to the Brexit transition period. That strong, united opposition stance would also send a powerful message to our European friends and partners, who we know are favourable to the logic and sense of this request.”

However, the Government, while not directly in response to Mr Blackford’s letter, have already said that this will not be an option.

Michael Gove said today that “extending the post-Brexit negotiations and remaining under European Union rules could hinder the UK’s efforts to deal with coronavirus”. In his speech to the Lords European Union Committee, he said: “In these specific crisis arrangements because of Covid-19, we have seen the EU has shown a degree of flexibility on things like free movement and on state aid.

“But we cannot know, particularly when it comes to state aid, that it would necessarily be the case that we would have the freedom of manoeuvre that we might require. And certainly on other areas, perhaps in some of the data-sharing that might be required across Government departments in order to deal effectively with Covid-19, we can’t be certain the EU wouldn’t introduce or uphold rules that would be inconsistent with the freedom of manoeuvre that we might need.”

He also said, in his address to the Committee, that extending the transition period would hurt the UK’s financial pocket. He claimed that, for each additional year the UK had to follow EU rules, the cost “would be something between £20 billion gross and £10 billion net”. The UK is currently negotiating a post-Brexit trade deal with the EU on Zoom conference calls due to Covid-19.

We will bring you further updates on opposition party responses to Mr Blackford’s letter in due course.