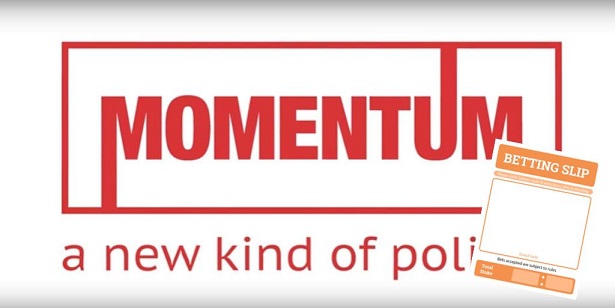 Wolves can reveal tonight that members of Momentum have been plotting to rig the result of the General Election result on Thursday by encouraging their volunteers to place bets with Betfred or Ladbrokes. Their intended aim is to cause undecided voters to believe a Labour majority is more likely, thereby swinging their own vote towards the party. The group of activists discussing the plot were largely NHS nurses, although it may not have originated with them.

In WhatsApp screenshots seen by Wolves, and published here, the plotters originally discussed the plans last night, but appeared to decide against them for the time being. However, the plan has now been re-awoken this evening. While it is legal to bet on an election result in this country, the practice of deliberately and strategically placing bets in order to influence its outcome can only be viewed as a highly questionable, and somewhat desperate, tactic. Momentum was thereby keen that the plans be kept under wraps.

Wolves understands that some members are now responding enthusiastically to the plans, and announcing their intention to carry them out. This is since the move was “finalised” earlier this evening:

In the latest message, its author clearly hopes that the gambling outfits will not be “alert[ed]” to this practice, and suggests that placing the bets in person, in a betting shop, would be a much better way of drawing less attention.