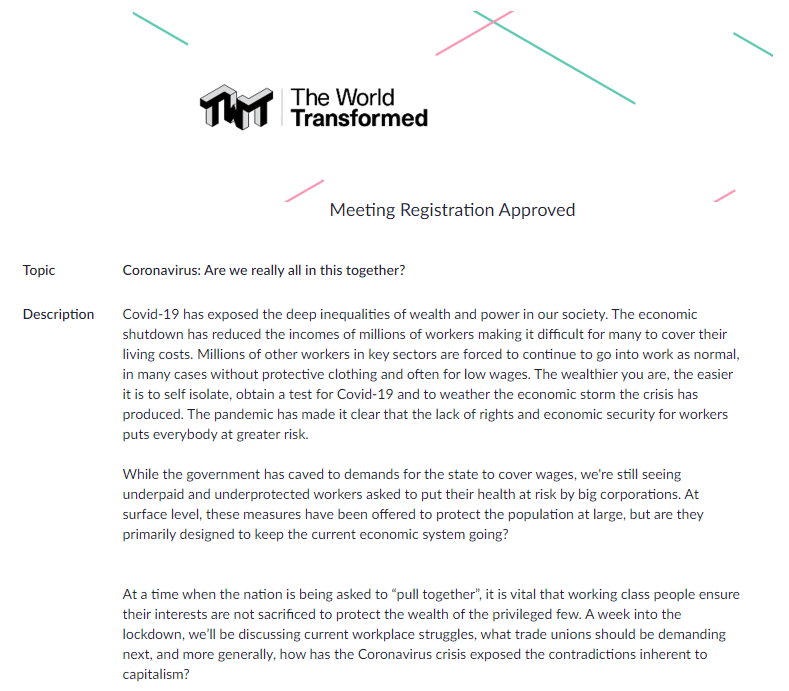 In the latest of what is to be a series of weekly conference calls hosted between Momentum and The World Transformed last night, left-wing activists have again sought to politicise the current health crisis and frame it in terms that set employees against employers.

One host said: “On the surface, the Government measures have been offered to protect the population at large, but are they primarily designed to keep capitalism going, and to ensure we’re able to return to business as usual when this chaos finally ends?”

Another host said: “We must fight to ensure our class interests are not sacrificed to protect the wealthy.”

One guest, the author Christine Berry, said: “I really think we need to not underestimate the ability of the system to stabilise itself in the face of a crisis, rather than to be overhauled – not least because of the fact that the bad guys are in charge.”

She added: “Why should it be the case that the only group in society whose income is completely protected, that have been asked to make no sacrifice, to take no hit whatsoever, are people who make their money because they own stuff?”

Ms Berry also suggested measures including an “emergency wealth tax”, “debt jubilees” and “rent freezes”, adding that “that’s where the conversation needs to go on the left”.

One host also took the opportunity during the call to ask attendees to donate to The World Transformed, describing the need for “collective political education” as “more important than ever”, even during a period when many will be struggling to pay their own bills.

In reference to the Government’s unprecedented scheme to pay 80% of employees’ wages, Victoria Jordan, a trade union campaigner and Wetherspoons worker, said on the call that her campaign was calling upon their employer and “demanding that they pay the extra 20% because it is the least that they can do”, adding that “the company can afford the extra 20%”.

One guest, Sam Oladeinde, an actor and member of the Equity trade union, said that “what we really need to stress is that it’s the rich that are fighting to keep a small percentage of their money, whereas everyone is surviving for their lives, and it’s just not clear enough to those people who have the money that what we’re fighting for are two very different things”.

In response, one host called for people such as Andrew Lloyd-Webber, who “own certain sections of the West End”, to “start digging deep and paying up”.

The Shadow Chancellor, John McDonnell, also joined last night’s call. He praised The World Transformed as “one of the best initiatives that’s come out of the left for quite a while in terms of political education”. He went on to say that, although the Chancellor, Rishi Sunak, had set out a spending package worth £30 billion to boost the economy in response to the Coronavirus crisis, “actually, when we looked at the detail, it was nearer £12 billion”.

This would appear to be a misunderstanding – while it is true that the measures specifically targeting Coronavirus amounted to £5 billion for the NHS and £7 billion for businesses, the rest of the £30 billion package contained measures designed to stimulate the economy in other ways.

Later on the call, Mr McDonnell said of the Government’s response to the crisis that: “The first scheme they came up with was to protect businesses, to give them loans – £230 billion’s worth of loan guarantees were put forward – there was no mention of workers in that proposal.” This, again, would appear not to comprehend that protecting businesses is vital for protecting jobs, which in turn protects workers in the long run.

Mr McDonnell also noted that the Government’s wage payment scheme was “voluntary”, and it is indeed true that some businesses will choose to lay off staff, as he later mentioned, while other business owners may choose to sell up instead. He further stated that “[for] those companies that are going for the job retention scheme and therefore furloughing people, the scheme does not cover people on part-time or short-term working”.

According to the Government’s website for the scheme, this is wholly incorrect, although it is true that employees on reduced hours are not eligible – however, this is not the same as being ‘part-time’.

The Shadow Chancellor later suggested that a “wealth tax” may be required in order to help pay down the debts that will be run up as a result of this crisis. This, of course, has been a typical Corbynite policy for several years prior to the current situation.

We will bring you further updates on the conference calls hosted between Momentum and The World Transformed as they take place.