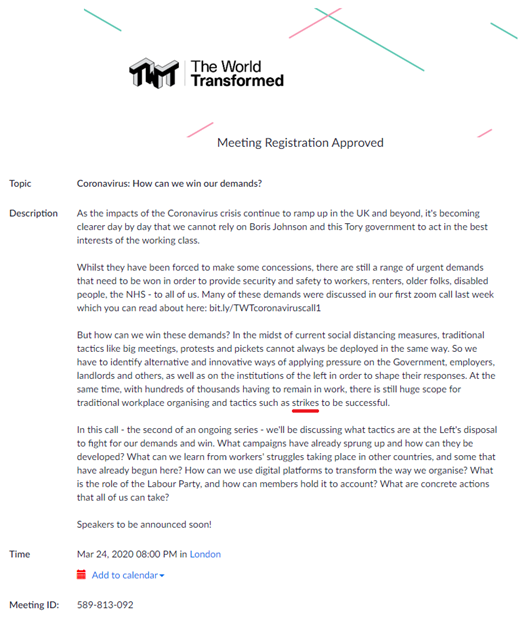 Left-wing activists have sought to politicise the Coronavirus crisis further, in a second strategy call hosted by The World Transformed in collaboration with Momentum last night. This follows an earlier call the week before, as covered by ConservativeHome, some of which subject matter was sourced by Wolves.

It follows an earlier revelation by Guido Fawkes on Monday of certain remarks that the Chairman of the Labour Party, Ian Lavery, made during a previous conference call with party supporters last Friday.

Early on in this call, one of the hosts suggested that the current crisis “gives an opportunity for those in power to take advantage and rearrange society to their liking”. As advertised on the strategy call invitation, its speakers included:

These calls will apparently be held every Tuesday night at 8pm for the coming weeks.

At one point on the call, Mr Johnson stated that he believed it was “very likely” that “a lot of the treatments, including the vaccine for COVID-19, is [sic] probably not going to be free”, attributing this to “large amounts of the private sector … getting involved”. He appeared to imply that, under an entirely publicly-funded healthcare model, this would not be the case.

One host encouraged attendees to donate to the legal action planned by the Independent Workers’ Union of Great Britain to “sue the Government over their failure to protect precarious workers”.

A host further stated that “we also need to make sure that positive measures being introduced, for example to protect workers’ salaries … aren’t simply rolled back when the crisis is over“, asking one guest speaker – a Labour Councillor – to explain “what measures have been suggested by Councillors across the country and, most importantly, what’s the plan to to entrench them after this crisis is over“.

This same speaker also said: “We need to be fighting for the Government to have the right to requisition buildings and to put them to socially good use … once that power’s there, the question then becomes do we fight to keep it”.

A host said shortly afterwards that “it’s clear that going back to business as usual is just not an option”, in the context of forming “a broader strategy for the Left”.

Rebecca Long-Bailey, the Labour leadership candidate, said on the call that “this crisis very much creates the space for a discussion about Universal Basic Income”. She also suggested that there should be a principle of “conditionality” that applied to “particular sectors” bailed out by the Government as the crisis worsens. She added: “We want to see, in return, equity stakes – public ownership. We want to see conditions that the workforce will be paid and treated well. We want to see that trade unions have access to those workplaces.”

Ms Long-Bailey further stated that “we need to make sure that we demand, as we leave this crisis, for [sic] an economic model that protects all of us, and that’s Socialism. And I think the case in this crisis is very strongly being made for Socialism.”

One host also mentioned that “all major Italian unions have threatened a general strike from tomorrow to demand a more extensive shutdown”. Another host appeared to approve of this enthusiastically, calling it “amazing”. This should perhaps be seen in the context of The World Transformed’s previous strategy call, in which GMB organiser Helen O’Connor called for strikes in the UK if the union’s “demands” were not met by the Government.

The final speaker, Amina Gichinga, who was announced as “an organiser for the London Renters’ Union”, said: “How do we use, like, public health or all the things that intersect with our housing, to, like, call more people in our neighbourhoods into this discussion and get them leading in a rent strike?”

She immediately added “not that we’re necessarily doing that”, in a remark that appeared jovial.

At the -3:10 timestamp on the call as published on Facebook, the hosts inadvertently breached personal data protection by revealing the mobile phone numbers of several of the call’s speakers.

We will bring you further reports on the co-ordinated activities of Momentum and The World Transformed as they proceed.