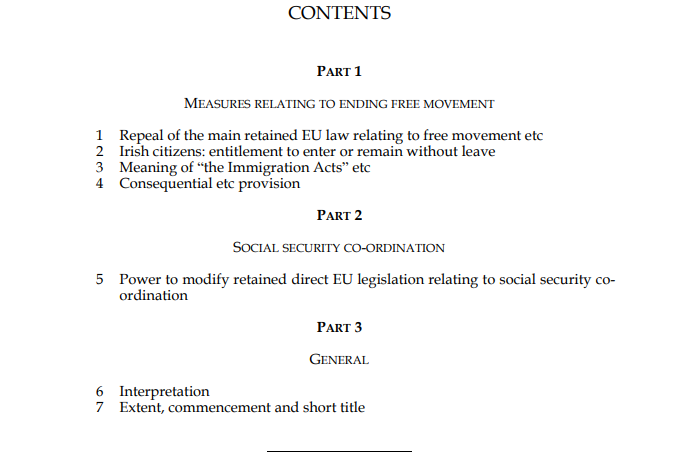 The Minister for Future Borders and Immigration, Kevin Foster, has today re-introduced the previous Government’s Immigration and Social Security Co-ordination (EU Withdrawal) Bill in the House of Commons. This bill provides for the end of existing free movement currently retained for EU citizens. It does not set out the Government’s new proposed immigration system itself.

Perhaps by coincidence – or perhaps not – today marks the one-year anniversary of the last time this Bill was discussed in Parliament, under Theresa May’s Government. The Bill had previously not passed through Parliament successfully, owing to the turbulence of the time, and that parliamentary session of course ended when the new Prime Minister temporarily prorogued it. This meant that the Bill would have to be re-introduced in a subsequent session.

Accordingly, the Bill itself does not appear to have changed substantially (if at all) since its previous outing. The Minister said: “Today, we’ve taken the momentous first step to end free movement and take back control of our borders, delivering on the people’s priorities.”

While free movement to settle and build a life without following the UK’s future immigration process will now end for EU citizens at the close of this year, the Government was keen to point out that visits to the UK for tourism purposes will still be permitted for up to 6 months without the need for a visa. This is presumed to remain the case even in the event of future relationship talks collapsing between the UK and the EU.

The special status for citizens of the Republic of Ireland will also be preserved, in that the new immigration measures will not apply to these EU citizens. For the rest, any who are still resident by the end of the year will have until June 2021 to apply for Settled Status – which is to say, indefinite leave to remain.

Finally, the Bill paves the way for the Government to make alterations to social security arrangements for immigrant citizens, meaning that new settlers from any origin will need to pay into the tax system “for a reasonable period of time” before they can access UK benefits. It appears that the Government is still being deliberately vague about exactly what this period will be, and it may not yet have been determined.

It comes amid unrelated EU withdrawal news appearing in The Mirror yesterday, which reported that the British Navy would be tasked with patrolling the UK’s fishing waters once the transition period ends, in order to ensure that whatever future arrangements negotiated with the EU are respected.

We will bring you further developments on the progress of the major Brexit-related bills through Parliament as they emerge.