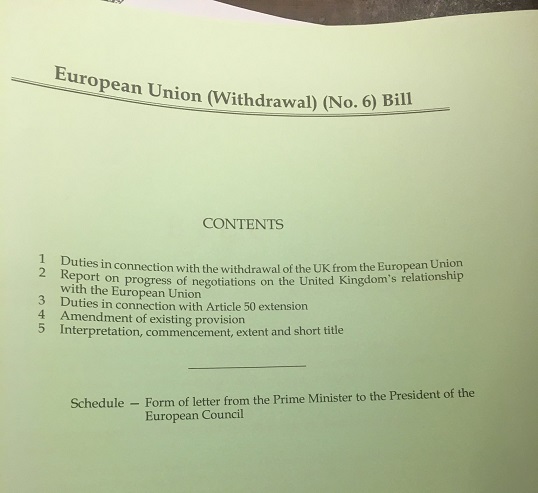 An amendment to the European Union (Withdrawal) (No. 6) Bill proposed by Stephen Kinnock, requiring the Government to seek an extension to Article 50 in order to bring Theresa May’s Withdrawal Agreement back to the House, but with amendments to the Political Declaration, has been passed unexpectedly this evening. The Third Reading, incorporating this amendment, was also passed by the Commons, meaning the Bill will now move on to the House of Lords.

The amendment, which seeks to incorporate the outcome of the cross-party discussions that the former Prime Minister held with the Labour Party back in May shortly before her resignation, was not expected to be passed. However, it appears to have done so almost “by accident”, owing to the absence of any Government tellers to count the vote. Sources in Westminster tonight suggest that this was in fact no accident, but a deliberate manoeuvre on the part of the Government. By all accounts, there was confusion on the part of many in the House as this development unfolded.

Specifically, the amendment states that any extension sought should be “in order to debate and pass a Bill to implement the agreement between the United Kingdom and the European Union under Article 50(2) of the Treaty on European Union, including provisions reflecting the outcome of inter-party talks as announced by the Prime Minister on 21 May 2019, and in particular the need for the United Kingdom to secure changes to the political declaration to reflect the outcome of those inter-party talks.”

What this will mean for the future passage of the Bill through the House of Lords remains unclear. Their Lordships will now be asked to consider a Bill that effectively requires the return of Mrs May’s Withdrawal Agreement – thrice defeated in the Commons – along with amendments made to its Political Declaration as proposed in controversial cross-party talks, which some might argue precipitated the beginning of the end for the former Prime Minister.

Whether this development would fundamentally alter the complexion of the issue the Lords will be asked to consider remains a matter of speculation in Westminster this evening. It comes amid reports that the Government has tabled around a hundred amendments to the Bill for consideration in the Lords, which is seen by many as an attempt to filibuster the Bill’s passage until Parliament can be prorogued on Monday.

Presuming this amendment is not defeated in the Lords, it seems possible that the Bill as returned to the Commons could well have the unintended effect of rewinding the Brexit debate by several months and ‘resurrecting’ the Withdrawal Agreement. The WA had been presumed effectively dead at least since the Johnson administration came to power in late July.

Far from moving the debate on to a straight choice between No Deal and a different deal with the European Union, it could well turn out that this Bill that was intended to wind the clock forward, may in fact end up winding it back.

In the meantime, MPs are currently debating whether or not to hold an early General Election. With the Labour Party set to whip against it – saying it will only vote for one once the Benn Bill has been made law – this motion (as put forward by the Prime Minister tonight) is not likely to pass.

UPDATE @ 21:40 – MPs have rejected the Prime Minister’s motion to call an early General Election by 298 votes to 56. Labour MPs largely abstained, and we understand that this was the whipping instruction from the Labour Party. The Leader of the Opposition was not present in the Chamber when the result of the vote was read out. Given that the required two-thirds majority of 434 MPs was not achieved, the Prime Minister has responded by saying that this must be the first time in history that the Opposition has “voted to have confidence in Her Majesty’s Government”.