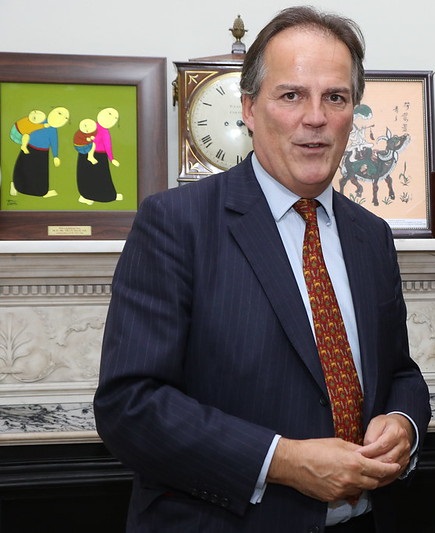 When I awoke this morning to Mark Field trending on Twitter, I was shocked as I knew it was far too late for it to be a last-minute leadership bid that nobody expected. I then clicked on the link and was met with an onslaught of tweets stating how he’s abusive, a woman-beater, needs to resign etc, only to look further to find that all he did was defend a senior MP from a potential threat.

There was very clearly a security lapse at Mansion House last night as a group of Greenpeace protestors broke into a dinner that The Rt Hon Philip Hammond MP was speaking at. They proceeded to ‘peacefully protest’ about climate change, until one of the Greenpeace members, a white middle-aged woman in a dress (as it keeps being pointed out) headed towards Philip Hammond. Mark Field proceeded to get in her way, restrain her and remove her, eliminating the potential threat due to the lack of security present to do it themselves.

I am more than certain that when people come to protest, they know the potential risks. They know that they will most likely be removed, and they know that to create the media attraction they crave, they must cause a stir. That is what they did. The person, and I say person, because the gender of the protestor really isn’t relevant, was approaching a senior MP at pace. Mark Field placed himself in potential danger to remove the perceived threat. He should be commended for this, not vilified.

So much of the debate has been focused around the fact that this is a white, middle-aged woman in a dress, but that is not relevant. It’s naïve to think that because of these characteristics she is not a threat and it shows prejudice to the narrative that women are meek and mild and will not pose danger, when they can be just as dangerous and vicious. If this had been a big burly BAME man, people would not have been complaining because of the awful narrative that is wrongly painted about BAME people in the media regarding aggression. The whole narrative around ‘Mark Field is cancelled’, is based around him ‘attacking’ a small innocent woman. She might not have been.

A continuous point has been made that she did not have a weapon and act violently, but, that is not a chance I think should ever be taken. More and more often, people and groups who want to commit acts of violence put forward innocent women as they are much less likely to be stopped or taken seriously. Have we really reached a point where the quality of Mark’s actions depends on whether a weapon was found on her person afterwards?

The political climate has become so heated that MPs need to be careful of all potential threats. What happened to the likes of Jo Cox MP and PC Palmer losing their lives to extremism was heart-breaking. With the rise of milk-shaking against Nigel Farage and others, Jeremy Corbyn getting egged and many other threats of violence, we need to be careful that MPs are not scared to defend their and their staff’s security for fear of the media backlash. If someone feels there is a credible source of danger or intimidation, they have a right to ensure that threat is removed.

On the 3rd of March this year, a man sadly attacked Jeremy Corbyn with an egg, and was then forcibly removed by staff member Jack McKenna. After the event, he was visibly praised by Jeremy Corbyn for his swift actions, and rightly so as he removed the threat. But why is it one rule for one party and another rule for the other?

Yes, the woman did not get the chance to carry out any actions of violence, but she could have, and that is the point. So, I applaud Mark Field for putting himself in potential danger to protect his colleagues. He should be praised for his quick actions, not vilified for acting in the interests of security.

UPDATE @ 29/07/2019: Wolves understands that the Cabinet Office investigation into Mr Field has since been dropped, given that he has not been re-admitted to the new government by PM Boris Johnson. However, the internal Conservative Party investigation is continuing.

Elena Bunbury is on the Conservative Parliamentary selection list, and also works as Head of Communications for 1828, a neoliberal opinion platform.

How the Mark Field incident unfolded

The EU’s pandemic recovery fund is a leap towards ever-closer union...

The Conservative Party must re-evaluate its approach to Black Lives Matter...

Schools should teach politics and the voting age should be lowered...