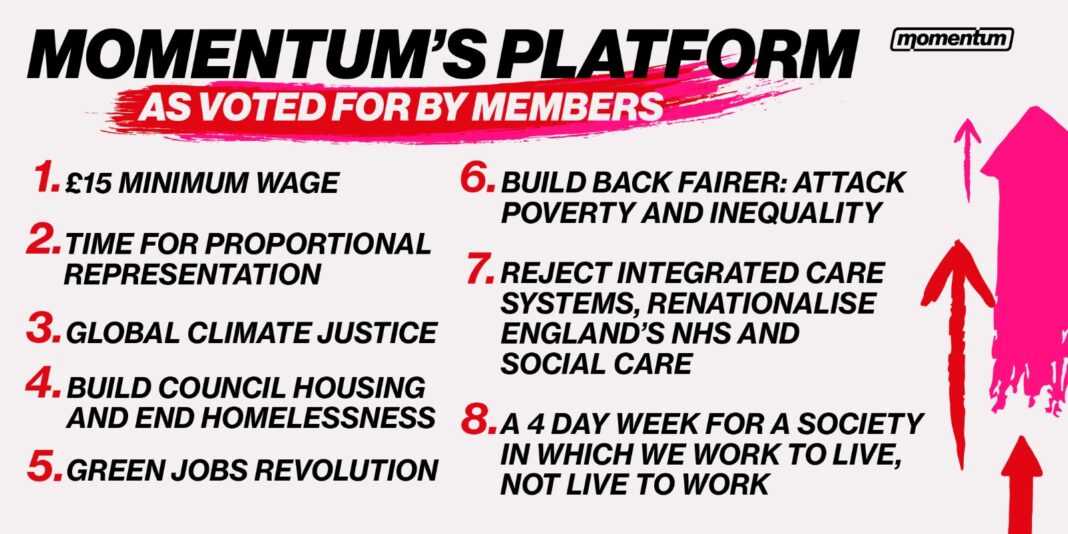 Momentum members have voted for policy measures that, if combined and implemented, would see a very significant pay rise for all workers on the minimum wage, along with a reduction in their working hours.

The pro-Corbynite campaign group, which seeks to influence the Labour Party, published the results of its ‘policy primary’ last night. Voting had been open since 24 March.

A total of eight measures were selected for inclusion in the group’s campaign platform, out of 33 ideas originally put forward:

Alongside measures aimed at tackling climate change, homelessness, social care issues and the electoral system, the first and eighth measures selected would increase the minimum wage from the current £8.91/hour for all workers aged 23 and over to £15/hour, while also introducing a four-day (32-hour) working week.

The motions selected also seek to ban zero-hours contracts and set the minimum number of contract hours at 16 “for all workers who want them”, citing “automation and technological gains” among the reasons for moving to a four-day working week.

The organisation had held this ‘policy primary’ for its members to vote on the measures they wanted to be put forward as motions at the next Labour Party Conference in late September. Several other measures, including the abolition of the monarchy, the establishment of a Universal Basic Income and a strategy of elimination of Covid-19 submitted by the Zero Covid coalition, did not receive sufficient support.

Momentum will now seek to have these eight measures included among the motions selected for deliberation at Conference. If adopted through sufficient delegates’ votes, they would become official party policy in line with the way Labour policy is shaped.

If this occurred and a future Labour government subsequently implemented the first and eighth policies together, there could be a significant financial impact on UK businesses.

In a 40-hour working week based on five eight-hour days (assuming a paid lunch break), a worker aged 23 or over on the minimum wage would currently earn approximately £356/week before tax. For a four-day working week with the same daily hours, this would in principle reduce to around £285/week.

However, under the proposals approved by Momentum members, that would not be allowed to happen as the four-day week is required to incur “no loss of earnings”. Instead, combined with a minimum wage of £15/hour, and even with the reduction in hours, a minimum-wage worker aged 23 or over would earn roughly £480/week.

This would equate to a pay rise of around one-third, combined with a one-fifth loss of labour for the employer compared to the present day.

Some firms, including several major brand names, have reportedly been trialling a four-day working week already as a result of the coronavirus pandemic. However, their measures are not being combined with a pay rise.

A source with close business management connections told Wolves: “This would be completely unworkable. Businesses are already suffering enough from the pandemic, and there’s no way they could afford to pay their staff this much more to do that much less work.

“They’re all for rewarding their staff properly for the work they do, but moves like this would send plenty of viable businesses over the edge. Political organisations should be concentrating on how to support entrepreneurs, not hitting them with more and more expenses alongside lower productivity.”

While Momentum does have considerable representation within the Labour Party membership, its policy platform is by no means representative of the views of all Labour members and other movements seeking to influence Labour policy through a different ideology also carry significant weight within the party.