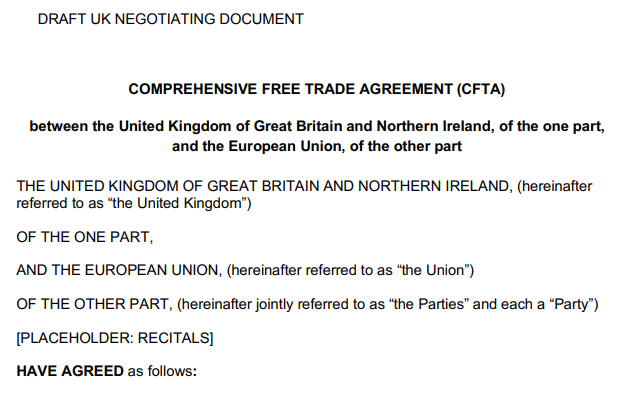 The move has been seen by some as an attempt to gather pace for a last-ditch attempt at achieving the negotiating objectives set out in the Political Declaration agreed between the UK and the EU last year. Under these terms, both parties are obliged to use their “best endeavours” in “good faith” to reach an agreement on a future partnership.

But the negotiations have been under strain in the past few months, with some sources privately acknowledging that an agreement of any kind is unlikely at this stage, unless either party is willing to make major concessions on its negotiating position.

The UK has accused the EU of failing to acknowledge the former’s new status as a fully independent, sovereign nation. This comes into play in respect of fishing rights, for example, with the EU insisting on a similar level of access to UK waters as it currently enjoys. The UK has also taken issue with the EU’s continuing demand for a “level playing field” between both parties, which has been seen as insistence that the UK continues to follow EU rules and accept ECJ oversight, even after the transition period concludes at the end of this year.

Meanwhile, the EU has complained that the UK is asking for benefits that are not found in any of its other, less comprehensive partnership agreements, such as the CETA deal between the EU and Canada. The EU’s Chief Negotiator, Michel Barnier, said last Friday: “Every time we meet they say they would be happy to have a Canada-style agreement, but at the same time … they ask for far more from us than is available under the Canadian model. We are not going to bargain away our European values to the benefit of the British economy.”

Elements of the UK text published today appear to have been drawn from existing EU deals such as CETA. One such notable holdover is Article 34.8:

One source has noted that Section 2(b) of this in particular may well have implications for a newly-independent Scotland applying to join the EU, in the event of victory for Nicola Sturgeon in any future independence referendum campaign.

The full text of the published draft text can be read below:


We will bring you further updates on the progress of the talks when they resume.