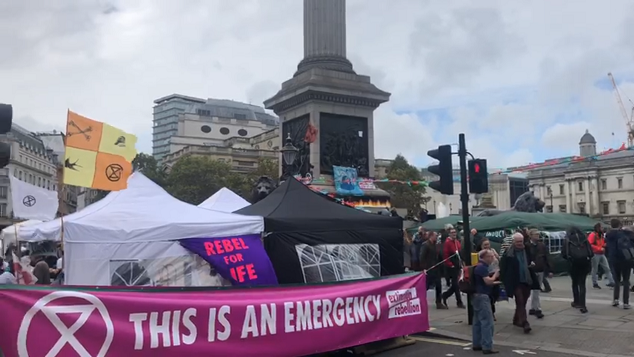 The centre of the Capital has been brought to a standstill over the last few days, with Extinction Rebellion protesters amassing on the streets of central London. Over 30,000 protestors had been expected today, with many occupying Trafalgar Square with camps and putting signs across the area’s landmarks. However, their action had been called into question over the course of Monday, yesterday and today, with many voices accusing the group of blocking or slowing emergency services which had tried to pass through the occupied routes.

The aims of the protestors seemed mixed, with some seeking the simple attention of the Government, while many others demanded more extreme actions, from the grounding of flights, to the implementation of a ‘Green New Deal’ as discussed by some within the United States. When talking to Wolves this morning, some protestors discussed some of the group’s ideology, arguing that the aim of the protest was not to simply get the eye of Government on them, but part of a longer aim in which the protestors  aim to cause large workloads for the policing service, in turn pushing the police to greater strain, causing them to push politicians to deal with the climate problem.

However, some may argue that they underestimate the power the policing service can wields within Parliament. They were also accused of hypocrisy on Tuesday morning for allegedly using a diesel-powered generator at one of their base camps. Furthermore, Extinction Rebellion took over one of the country’s biggest meat markets this morning, replacing butchery stalls with organic fruit and vegetables in its latest stunt aiming to paralyse London. Activists occupied Smithfield Market in Farrington overnight with a candlelit vigil and set up tents where they camped overnight.

On Tuesday morning, with the capital braced for a second day of climate change demonstrations, stalls usually filled with fresh meat had been replaced with vegan options. In related news, former Conservative Party treasurer Lord Fraser, 72, was seen in his dressing gown remonstrating with protesters outside his home. The Conservative peer confronted the protestors in his nightwear stating: “It has been reminiscent of the sectarian marches in Belfast. They are banging drums, shouting loudly and marching around residential streets. They are not doing their cause any good. They are irritating normal, everyday people. That’s not the way to bring about change.”

Lord Fraser was not the only one to criticise the group, with Maya Lingan, a 22-year-old who works in the environmental sector, left saying she was “very disappointed”. She said that the protests “lacked diversity” and were “just for people who could afford to take two weeks off work”.

Ms Lingan added: “I can’t see how people blocking the roads and banging drums are helping the cause. So many of us are concerned about climate change but this was just not something the mainstream could get on board with.”

These stories are still developing, with figures on the estimated number of protesters and arrests expected to through in the next few days. Below is some footage from this week’s protests so far.