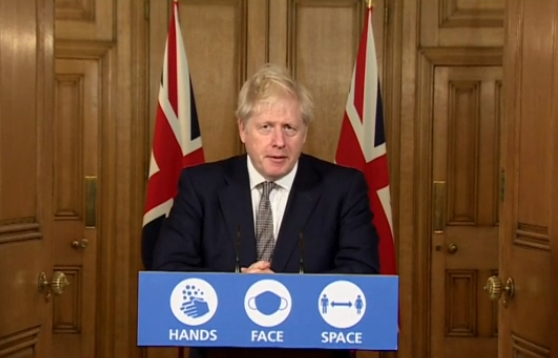 The Prime Minister, Boris Johnson, has tonight announced a second national lockdown for England, starting as of Thursday. It comes as the UK today passed 1 million COVID-19 cases.

The Prime Minister made the announcement at a televised press briefing from 10 Downing Street at 18:50. Mr Johnson was joined by England’s Chief Medical Officer, Chris Whitty, and the Government’s Chief Scientific Adviser, Sir Patrick Vallance.

It represents a U-turn on the Government’s previous position, which was to maintain the 3-tier system it had announced beforehand. The Labour Party had previously called for a two-week “firebreak” lockdown as an alternative to a national shutdown.

This announcement comes after recent Government documents have suggested the UK was on course for a much higher death toll than in the first wave back in March. It is believed that the restrictions will last until 2 December at present, with the intention that Christmas celebrations may be able to be closer to normal this year.

Mr Johnson began the press conference by saying: “I can assure you I wouldn’t do this unless it was absolutely necessary”. Mr Johnson and his medical advisors proceeded to lay out the Government’s recent findings and plans for the future.

The Prime Minister stated that, as of Thursday, “people must stay at home”, echoing his initial announcement during the first wave back in March. He also mentioned that the furlough scheme would be extended through November. He also said that shielding measures for the vulnerable would not apply in the same way as they did before.

He added that we must be “humble in the face of nature”.

Chris Whitty commented on how the R rate (Rate of Infection) has been substantially lower, due to people’s efforts in maintaining social distancing and wearing face coverings.

However, there is still a significant rise in hospital admissions and cases. The Chief Medical Advisor also mentioned that “some hospitals now have more COVID patients than at the previous peak”.

What will the new restrictions mean?

The UK recorded another 21,915 confirmed coronavirus cases on Saturday, bringing the total since the pandemic began to 1,011,660. A further 326 people were reported to have died within 28 days of a positive test.

The UK is now the ninth country to reach the milestone of a million cases – after the US, India, Brazil, Russia, France, Spain, Argentina and Colombia.

The announcement raises the question of whether this will be the second and final lockdown. Some commentators have suggested that it may just be a recurring pattern every time there is a severe rise in cases, hospital beds and the R rate.

MPs are expected to vote on the fresh measures on Wednesday.

It’s too late for reform, Auntie Beeb needs to be defunded...

Corbyn, Boris, Hunt – British politics has never had it so...