Home Opinion The EU’s pandemic recovery fund is a leap towards ever-closer union –... 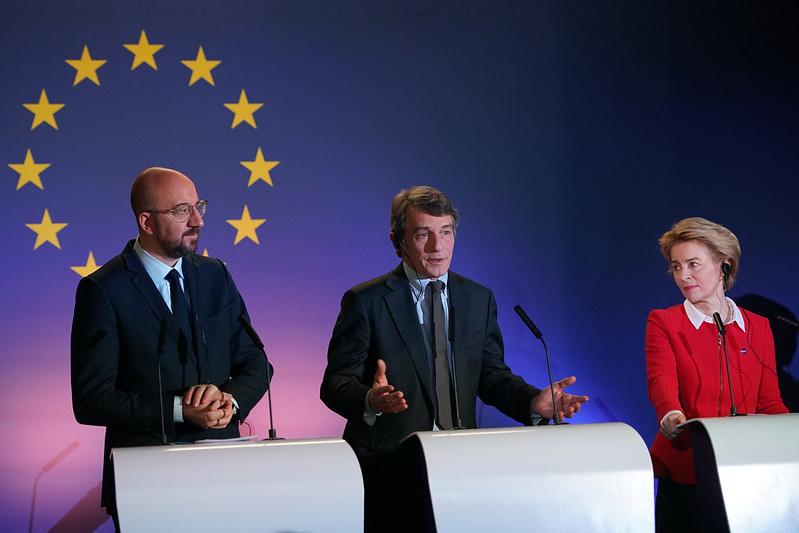 Marathon talks recently concluded between EU leaders as they battled over the details of its multibillion-euro pandemic recovery fund. With France and Germany head-to-head against the Frugal Four of Austria, Denmark, the Netherlands and Sweden over grants, veto rights and funding criteria, you could be mistaken for seeing the talks as the break-up of this club. However, this is in fact a significant leap towards further integration of the bloc, which the UK would have surely vetoed had it still been a member.

Firstly, the recovery will be negotiated as an add-on to the EU’s €1.1tn seven-year budget, meaning that all members are financially responsible for it. The fund, totalling €750bn including €390bn in grants to poorer nations, will be taken onto the EU’s own books. Most of its beneficiaries sit in the eurozone, with the euro hitting a four-month high against the dollar as the leaders came to an agreement. Yet, Denmark, Sweden and Poland, all non-eurozone nations, are keen contributors to the fund.

This is a stark reminder of Britain’s position in the euro crisis of 2010-12, when David Cameron refused to grant funding to eurozone countries. Britain’s absence has weakened the representation of non-euro nations such as Sweden, 70% of whose exports are sold to the EU.

This form of collective debt to bail out weaker members of the bloc will undoubtedly have Europhiles salivating as they take on approximately €750bn to their own books. In unprecedented fashion, EU leaders have agreed to establish a federal deficit as an instrument of macro-economic crisis management. Brussels will borrow money from debt markets and distribute it, largely as grants, to hard-hit countries to help finance their reconstruction. This is slowly strengthening the concept of a central EU Treasury, borrowing and redistributing money around the bloc to promote ever-closer fiscal union.

Perhaps more worryingly, as the UK is still in its Brexit transition period, we could well be charged with a share of this debt if the fund is pushed through before this period expires, which it almost certain would be were we to extend it.

Secondly, Germany, the current President of the Council of Ministers, is increasingly strengthening its grip on the bloc, as they will be left to cover our portion of the pandemic bill. The Commission is reportedly planning a €13bn increase in German contributions to the EU, making it by far the biggest contributor on a net and gross basis. At the same time, given that Germany has been relatively lightly hit in economic terms by coronavirus, it will receive less in funding than the southern nations such as Italy, Spain and Greece. This increase in Germany’s contributions roughly matches the €14.6 gross contribution of the UK, effectively leaving Germany to compensate for our absence.

Finally, the EU is edging towards a more unified legal system by allowing a majority of EU leaders to veto recovery payments to countries that are violating the rule of law. As any fellow Law student will attest, this is an incredibly vague term, which Hungary and Poland think will be used to sanction their governments. Again, this demonstrates Germany’s increasing dominance within the bloc, viewing it as a rule of law community with strict legal and fiscal duties for member states.

What began as a way to finance the economic chaos left by coronavirus has therefore become a conduit for ever-closer fiscal, political and legal union. Establishing a common EU Treasury and abandoning the prohibition of debt at an EU level is a defining moment in the bloc’s further integration, and paves the way for its new role in the decade to come.

The EU’s pandemic recovery fund is a leap towards ever-closer union...

The Conservative Party must re-evaluate its approach to Black Lives Matter...