Home Opinion The only options for a second referendum – Joe Smith 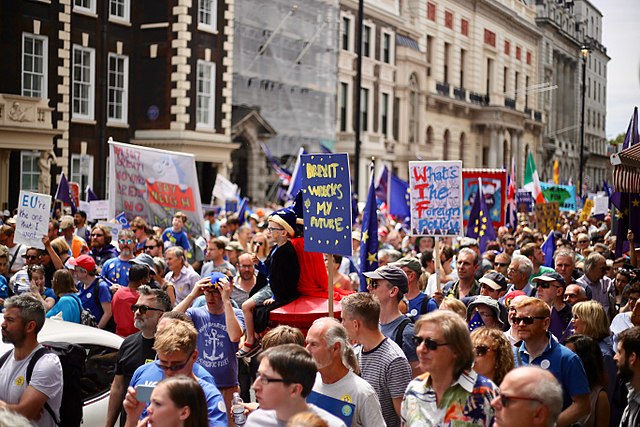 If we hold a ‘People’s Vote’, there should be two options on the ballot paper.  Remain and hard Brexit.

Both Remain and hard Brexit  are compromises; both are a step towards the other. Why? Our democracy and social fabric absolutely depend on the outcome.

There is a strong case for a binary choice rather than a three-way vote. Three choices could cause the outcome with 34% of the vote to be carried out, despite the other two options having 66% of the electorate’s support. It might also be favourable to put in place a rule which states one of the two options must gain at least 55% of the vote on a turnout of 70% of those eligible – this would enhance the legitimacy of the outcome.

The Remain choice would suggest an element of reform. Imploring policy makers to pursue a fundamental shift in our policies within the EU. The hard Brexit option would cut off our membership completely but still maintain vital networks, as well as deep diplomatic, security and defence co-ordination. This outcome would include a two year transition as currently planned, it would mean we can still get cancer treatments through EURATOM and that aeroplanes can still travel between the UK and the EU.

The UK is a powerful voice within the EU, we can influence our allies in the EU to restructure the institution. The UK and other Euroskeptic nations could join a coalition to negotiate what Nick Clegg called “an EU of concentric circles”, with our position in the middle ring.

If we vote to Remain and reform, the UK electorate will have stated that they want membership of the single market and the customs union and our MEPs to have a role in forging the way forward.

This should be the choice; a barebones deal to stop chaos, or Remain in the outer circle of the EU, mainly an economic player but also with influence over the direction. We can be close allies with the EU and simultaneously say we don’t want to continue with Macron and Merkel’s deep integration.

Or we can leave, forge our own trade deals, chose our immigration system, increase trade with our allies further afield in the Commonwealth and give them Visas in return. We can keep a close alliance with the EU with diplomatic ties, with cooperation through NATO, and with a robust agreement over the Irish border we can maintain peace through the Good Friday agreement.

The bare bones Brexit agreement should be followed by a general election. This will determine which party governs into the future and, importantly, the party which will negotiate the UK’s future trade agreement and partnership with the EU. This second referendum should determine if we leave – based on all we have learnt in the past two years – and if the UK votes for a barebones Brexit, the following general election will determine our future partnership with the EU.

All campaigns should have manifestos before the official campaigns are awarded designation, and a clear leadership structure. This is to incorporate some accountability – which was so lacking in 2016 – to make this process a legitimate and democratic one. It also to encourage the campaigns to take a longer view, and say what future relationship they want with the EU. This means no abstract promises, no unrealistic negative economic forecasts, but a campaign based on facts and compromise.

This is no easy thing to carry through but politically it can be done. It is the following twenty years which will restore or further damage trust in politicians, journalists, judges and ‘the elite’.