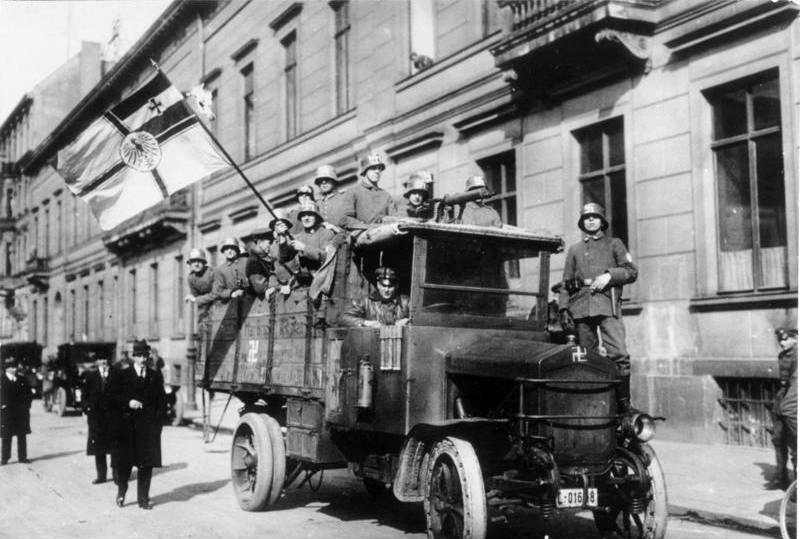 Every time someone dares to ponder this question a tidal wave of unhappy socialists hit back online. Accusations fly of stupidity and a lack of understanding. Some imply dark motives, such as Nazi apologists. This constant flare-up intrigued me – ‘The lady doth protest too much, methinks’.

I remember feeling quite shocked when I found out that the word ‘Nazi’ stood for ‘national socialiss’. The word is a portmanteau, meaning it was created by the joining of two other words.

Nazis were members of the National Socialist German Workers’ Party. They saw themselves as socialists. Hitler always referred to himself as a socialist. The word ‘socialist’ was placed in his party’s name, alongside the word ‘workers’ – it all feels a bit socialistic to me.

But it must be conceded that Hitler was not a trustworthy man. It would not surprise anyone if he used ‘socialism’ to further his evil ends. Forget for the moment that the first political party Hitler tried to join was the German Socialist Party and that he co-founded the National Socialist German Workers Party.

Let us start by defining what ‘socialism’ is. Socialism is an economic and political system where the community, or the state, owns the general means of production for the benefit of the people.

Followers of a Welshman, Robert Owen, began calling themselves socialists in 1841. Owen is seen as a founder of the Co-operative Movement in Britain. He said that workers should own the companies they worked for and share the profits among themselves.

To most people, Karl Marx is the modern father of socialism. His name is synonymous with a particular vein of socialism – Marxism. His basic idea was the world is split into the ‘workers’ and the ‘richer capitalists’, who exploit the ‘workers’.  The proletariat versus the bourgeoisie. He thought that when the ‘workers’ realised their exploitation, they would revolt and take over ownership of production. He believed that the ‘workers’, when in power, would not exploit others. His ultimate aim was communism, which he defined as a stateless, classless society with free enterprise.

This plan is worth reading to see what Hitler was ultimately aiming to achieve. I split the 25 points into two groups so I could assess the level of socialistic influence. Socialist-themed = 14 points. Nationalist-themed = 11 points. The majority of points are clearly socialist in nature. Hitler wanted to expand old-age welfare, break the ‘slavery’ of rent, nationalise businesses, create profit-sharing and reform land ownership. These are all socialist aims.

Hitler berated capitalism. He referred to it as ‘democratic warmongers and their Jewish-capitalist backers’. He believed that his war against the UK was fundamentally a battle against capitalism. The German ‘welfare state’ against the ‘plutocratic-capitalist Britain’. He even linked the war with anti-colonialism and the Arab struggle against Britain in Palestine.

I think it is becoming clear that Hitler, and therefore the Nazi Party, were socialists. The only difference is the Nazis stated very clearly that they wanted a type of socialism that only benefitted the German state and people. Therefore, they created an openly racist form of socialism. Some would argue that all forms of socialism tend towards nationalism and racism – just look at what the Chinese are doing to the Uyghurs… the Jewish experience in the USSR…. the genocide in Cambodia, where ethnic and religious minorities were systematically targeted. All of this would be familiar to a Nazi. Socialist countries surprise me, for they have fortress borders –not very international of them. Unless, of course, it is to prevent their own citizens from wandering off.

Finally, I have seen many tweets explaining that Hitler could not have been a socialist, for he murdered socialists. This is completely correct. Hitler killed many people. He was an equal-opportunities psychopath. It did not matter what race, colour or creed you were. If he did not like you, then you died. He did not like internationalist socialism – he considered it an enemy. He did not like communism – ‘Bolshevik-plutocratic world conspirators and their Jewish wire-pullers’. He did not like competition.

Socialism comes out of revolution. When revolutions are over, the purge begins. If we want to talk about who has murdered other socialists, then we must start with Lenin, Stalin and Mao. To reach the top of any socialist state requires a level of brutality not within most people.

Northern Ireland has a history of Protestants and Catholics killing each other. Both groups claim they are Christian. Sunnis and Shiites are both Muslim sects and they kill each other. Many ideologies split and follow different paths, yet claim affiliation to the same ideology. The Nazis followed their own version of socialism.

Basic socialism has always been practised in a historical sense. It was our way of life when we lived in small tribes. We shared things, for we were all related and pulled together to survive. I believe this innate sense of socialism is programmed into our DNA. This is why the idea of socialism will not die. But there is a big difference between co-operating in a small tribe and running a nation state. Even after the atrocities of the 20th century, the idea reverberates and remains popular. Can we fight our DNA?

This is not an academic paper. I am not a historian. I wrote this essay for my own benefit and for the pursuit of knowledge. This is a complicated topic that could take a lifetime to unpack and analyse. But from where I am standing, in the broad use of the term ‘socialist’, the Nazis were socialists.

The political divide should not be viewed as a left/right spectrum – for this makes no sense – but instead as a statism versus individual liberty spectrum. On this line, you will find the Nazis sat comfortably alongside all other socialists.