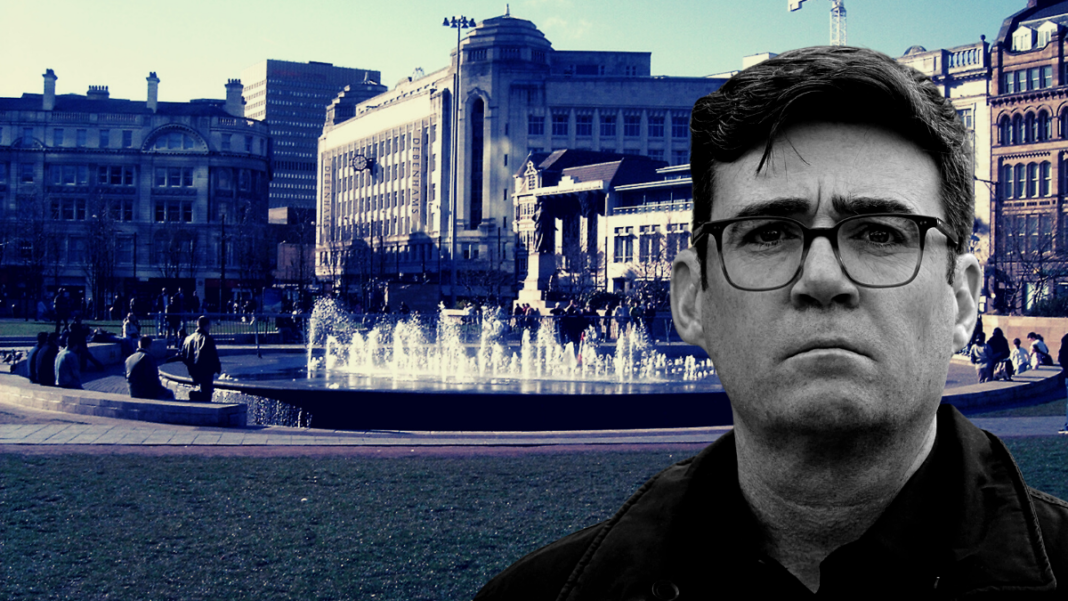 Let’s start by stating the obvious. Piccadilly Gardens is a blight on the city of Manchester. It is the main public open space in the city centre. It is the gateway to everything the city has to offer.

The main train and tram station is next door with links to the airport and the world. Buses across the region terminate here. Nearly all visitors to the city centre walk through or by this public space. I dare not think of their impression of the city and what they tell their friends about Manchester.

This location is infested with drugs, beggars, petty criminals and violent thugs. It has been a long-term hangout area for broken people with mental health issues. Drug dealers are replaced as quickly as arrested. Street drinkers crowd into drinking circles until violence breaks out. People cutting through the area are offered drugs for sale or hassled by beggars. When sunny, all issues quadruple as shirtless men cause mayhem.

This is not a new problem. Piccadilly Gardens has always been a problem. Do not fall for the trap of thinking the area used to be a lovely quiet space with sunken gardens and flowerbeds. 35 years ago, when I first ventured into the city centre as a teenager, it was a place to avoid, just like today. The sunken gardens, now gone, were full of street drinkers and ‘tramps’.

As a Council manager a decade ago, I had responsibility for the city centre. I was in charge of reducing crime and anti-social behaviour. Piccadilly Gardens was the number-one hotspot a decade ago. It had the highest number of incidents of violent assaults and sexual assaults. At this time, we had issues with street drinking, drug-dealing and anti-social groups. Exactly the same as today, except begging was not an issue. Imagine begging not being an issue in Manchester city centre – how times have changed!

I was not short of resources. It was before austerity and government budget cuts. I had a station full of police officers and Council staff to direct. Did I succeed in my quest to change the area for the better? Obviously not. I failed for the same reasons the area is still failing now. The issue is the behaviour of the individuals who frequent the area. Piccadilly Gardens has always attracted unsavoury characters.

The reason for the failure is inadequate policing – plain and simple. I know the police have had cuts to their budget, but this issue is decades old. The police do not fully understand anti-social behaviour and do not have the expertise to tackle it. The Council better understands anti-social behaviour, but they have lost many staff with the experience – myself included. Solutions now rely on enforcement action after months of information gathering. That means an issue is only tackled after months of it being a problem.

A decade ago, I created a fully comprehensive plan for tackling the issues in the Gardens for the long term. It incorporated short-term enforcement action on individuals to remove the main offenders. A medium-term plan to challenge individuals sooner, so issues did not escalate. There was also a long-term plan to change the perception of what behaviour is acceptable in the Gardens.

Unfortunately, bosses did not see any value in this approach. As always, they wanted results delivered in weeks to appease media attention. Working for a Council, you soon realise that everything you do has a political aim. Politicians want to be re-elected and demand action to achieve this. They do not need you to be successful, only to look successful. Long-term benefits are not discussed. Politicians today will not be in charge a decade from now, so they demand results today.

Here are some examples of my plan to change the Gardens and improve the quality of life for visitors.

Almost everyone we were targeting for enforcement action was unemployed and claiming benefits. That meant they had signed a job seekers contract and were supposed to be looking for work. We could prove that they were spending 12 hours a day in the Gardens and so not honouring their job-seeker’s contract. I wanted to work with the Job Centre. I wanted to challenge these individuals on their contractual obligations to seek employment. I had meetings with the Job Centre, but they were not interested. I raised it with my Town Hall bosses for backup, but no one saw any value in it.

Imagine turning up to sign on and being quizzed about the time you spent in the Gardens. Having to prove you were actively seeking employment. Imagine being warned that your benefits were at risk. Your housing benefit could be stopped and you could potentially lose your home. Enough to change your behaviour? I wanted to use every tool available to put pressure on criminals and troublemakers. Put them on the back foot. Make them understand that there are consequences to negative behaviour. This approach still makes sense to me today.

Next time you walk through the Gardens, look at every lamp-post you pass. There are ‘no alcohol’ signs on nearly every post. How do I know? I put them there over a decade ago. But go to the Gardens on a sunny day, the whole place is full of alcohol. I spent two years trying to get the police to enforce the law, as advertised on the signs. It was the police who had asked for the signs.

Police officers could not understand that drinking alcohol sent out the wrong message. If we allow office workers to break the law and drink red wine while sat eating their lunch, then it should be no surprise when a group of street drinkers turn up with bottles of white cider and cheap vodka. We need to be fair and consistent. One rule for all.

I had many arguments with the police over the importance of a zero-tolerance approach. Many officers thought tackling street drinking and low-level anti-social behaviour was beneath them. It was not real policing. Other officers openly told me they were afraid to work in the Gardens, especially after an officer broke his arm arresting an individual in the middle of the day. Trying to get officers into the Gardens was a challenge, and we had many more than we do today.

When I did manage to get an officer in the Gardens, they would leave as soon as they could, usually to deal with a teenager shoplifting in Primark. They would take any call rather than proactively patrol the Gardens. No one wanted to work there as it was hard work. It was tough and it meant you would be physically tackling someone almost daily. The police would crack down now and again. It would last a couple of days or a week, then everything would go back to normal.

It was window dressing. They would arrest some drug dealers and issue a handful of litter fines. The press would report the story and perceived success. My pet hate and a complete waste of time is the police portacabin. It appears in the Gardens after a serious incident or negative press attention. It is a large white caravan with the police logo across the front. It becomes a place for police officers to sit and relax, out of the gaze of the public. It is more desirable than standing in the Gardens in a high-visibility jacket.

The visual presence of police officers reduces issues. The portacabin does nothing to help. It removes police officers from being visible. I remember when it was placed near the Queen Victoria statue and created a hidden passage at the rear. This area was then used as the main drug-dealing spot for several months until I got it removed. Drug-dealing is a massive problem in the Gardens, as it is in the country as a whole. There is no point in trying to tackle this issue by targeting low-level dealers. Once arrested, they are replaced within the hour, and the situation is back to normal. A waste of time.

It takes months of undercover work to get the evidence needed on a target. Time should be spent making the Gardens a place where drug-dealers do not wish to do business. We achieve this by hassling dealers and customers on a daily basis – not by running an ad-hoc ‘big bang’ operation.

This article may feel like I am blaming the police – I am not. They need help and to understand how to tackle anti-social behaviour. Manchester council need to do better, for it is ultimately their responsibility. Do they have a plan? They didn’t when I turned up in post.

How have the police fared under Labour’s governance? Greater Manchester Police are now in special measures. They are failing the people of Manchester, according to the Government’s inspectorate. They failed to record 80,000 crimes. 1 in 4 were violent crimes. This is only the second time a UK police force has been placed into such special measures. The public gets the politicians they vote for – it is called democracy.

If you wish for change, then vote for change. The next set of elections are on 6 May 2021.

On a personal level, I feel despondent every time I walk through the Gardens. I see how much it has deteriorated over the last decade. People sleeping on the pavement and beggars on every corner. Open drug use. Dealers strolling around as if untouchable. Vulnerable people with mental health issues mixing with unsavoury characters and being abused. This is Manchester today. This is our main public space.

Workers, shoppers and visitors all walk past and must think: ‘What the hell is going on?’

I ask myself this question every day.

Council Memories: the case of the expensive picture frame – Nick...

I will end rough sleeping within my first year, or I...

We need to increase Stop & Search, but also ask local...