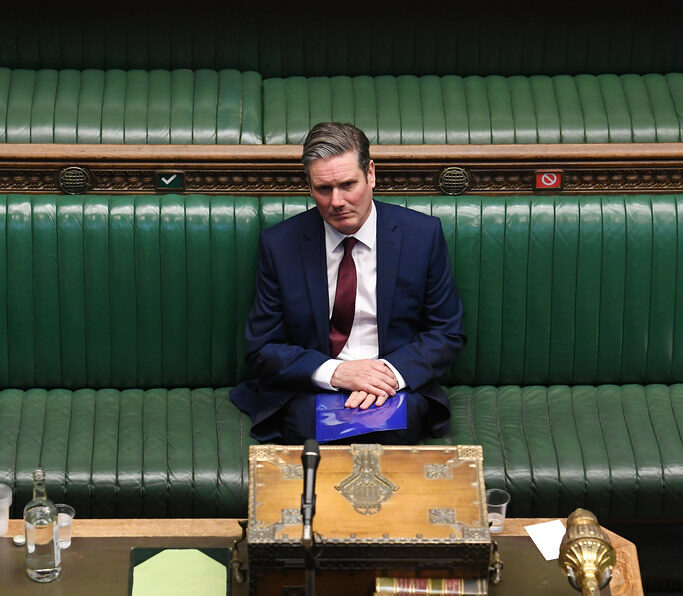 Prime Minister’s Questions in a depleted chamber is very much like watching a Premier League football match in an empty stadium. Players and politicians do not feel the same rush of adrenaline, loyal fans on the terraces and backbenches cannot goad their opponents into making mistakes, and they certainly cannot celebrate a 90th-minute winner or a political put-down.

Previously, this has been a leveller for Sir Keir Starmer. Since replacing Jeremy Corbyn as Labour Party leader last April, the former head of the Crown Prosecution Service has transformed PMQs from a university debate society for mature students to a moot court. Johnson’s attempts to deploy flamboyant language and utilise his charisma have been thwarted by a combination of barren Tory benches, forensically compiled graphs, and one-dimensional questioning.

Today, however, the barren benches saved Johnson from a Derby Day battering. After the Prime Minister opened by batting away Brussels’ accusations that Britain had blocked vaccine exports, Starmer dedicated all six of his questions to tackling Johnson on something far closer to home: nurses’ pay.

And whilst the Leader of the Opposition struck some important chords on an issue that is of historic importance to the Labour Party, his robotic delivery and failure to convert pressure into points let Johnson off the hook.

Starmer opened with “who deserves a pay rise more: an NHS nurse or Dominic Cummings?” But his tongue-in-cheek question received the faintest of jeers from his parliamentary colleagues.

As the two locked horns, the Labour leader then hoped to take advantage of the news that Johnson had spent £200,000 on renovating his Downing Street flat, quipping “they say charity starts at home, but I think the Prime Minister is taking this too literally”. Despite his efforts, Starmer’s joke fell flat.

Put it this way: if today’s performance was an audition to appear alongside Baroness Warsi on Channel 4’s Stand Up & Deliver, then I doubt Starmer will receive an invitation anytime soon.

At points, Johnson even helped Starmer. He repeated the line that the Labour leader would have kept Britain in the European Medicines Agency, wrongly accused the party of voting against the NHS Funding Bill in January 2020, and yet again redeployed the “we vaccinate, he vacillates” line.

Nonetheless, the Prime Minister’s colourful delivery, which included a table-thumping finish, ensured that this week’s defeat for Johnson will not last long in the minds of avid politicos and certainly will not go down in the annals of parliamentary history.

In what should have been a 3-0 victory for Starmer’s Labour, the party limped to a scrappy 1-0 Derby Day win against Johnson’s Tories. But with restricted access to fans and MPs producing inconsistent performances, from Craven Cottage to the House of Commons, we must wait a few more months before we see how the former journalist and ex-lawyer adapt to their Despatch Box encounters in a crammed post-Covid Commons chamber.