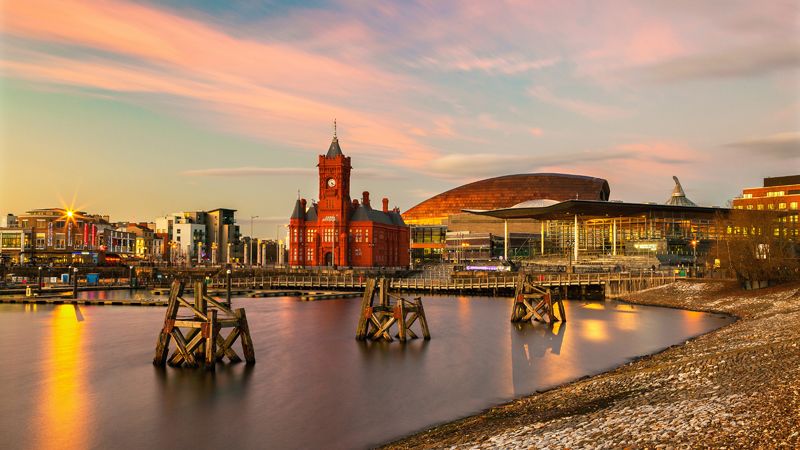 This week, the leaders from the five largest parties in Wales locked horns on the BBC in Cardiff.

But what electoral battlegrounds should viewers watch out for once voters go to the polls on 6 May?

The scarlet town has elected a Labour MP since the 1922 General Election. This record has not continued in Cardiff Bay, however, where Plaid Cymru defeated Labour in 1999 and 2007. Plaid Cymru will also be buoyed by their recent success in the 2019 EU Parliamentary Elections, where they pipped the Brexit Party to finish top. But 2019 was not perfect for Plaid Cymru. In the General Election, the Conservative Party, whose former leader Michael Howard grew up in the town, received more votes than the nationalists to finish second.

Target for: Plaid Cymru and Labour

The Senedd constituency in Gwynedd was a three-way contest between the Tories, Labour and Plaid Cymru in 2016. With polls suggesting the three main parties are continuing to tear away from the result, it could be an even more hotly contested constituency next Thursday. In 2019, Robin Millar, now chairman of the Conservatives’ Union Research Group, held the seat for the Tories, trebling their lead over the Labour Party to 6.4%.

Labour has won the marginal Senedd seat of the Vale of Glamorgan ever since the Assembly’s first election in 1999. In contrast, the home of Gavin and Stacey has voted blue in every Westminster election since 2010 and is represented in the Commons by former Welsh Secretary Alun Cairns. Cairns extended his majority in the constituency during the Brexit election to 6.5%.

There has long been a connection between Wales and the Liberal Party. In fact, David Lloyd George, Britain’s Prime Minister from 1916 to 1922, was a Welsh-speaker. Since Labour’s inception, however, this stranglehold has been reduced to just one Assembly Member. The party will be hoping that they can launch a fightback in Cardiff Central. From 1999 to 2007, the Liberal Democrats held this constituency, but following Nick Clegg’s decision to enter into a coalition with David Cameron, it has voted Labour in both general and devolved elections. The shift away from the Liberal Democrats has continued since the Brexit vote, and the party has fallen behind the Tory Party in third place in the 2017 and 2019 General Elections.

Whilst the Vale of Clwyd has continuously voted Labour in Senedd races, the constituency was a part of the Welsh section of the Red Wall that crumbled to give the Conservatives their majority in 2019. The Tories also had success in the North Wales constituency in 2015, when they won by just 237 votes. The Brexit-backing seat was also previously receptive to UKIP, and the Abolish the Welsh Assembly Party will hope to mirror such support come May 6.

Mark Drakeford was first elected to serve the people of Cardiff West in 2011. The First Minister’s majority in the capital, however, is far from safe. In 2016, Plaid Cymru’s Neil McEvoy finished in a close second. McEvoy has sat in the Welsh Parliament since 2016 as a regional Assembly Member, representing South Wales Central. He has been suspended from Plaid Cymru twice and was expelled from the party in 2018. Nonetheless, his decision to stand for the Propel Party may split the nationalist vote and allow an already popular Drakeford to retain the knife-edge seat.

In 2016, Plaid Cymru cut Labour’s majority in Caerphilly by a third. However, the nationalist party’s success in the Gwent constituency has not continued in the same vein. In the EU elections, the party could not emulate their performance in Llanelli and were beaten to first by Nigel Farage’s Brexit Party. Months later, it would be Boris Johnson that would outdo Plaid Cymru. The Tories managed to finish second, despite the Remain Alliance ensuring that Plaid Cymru would not have to fight off candidates from the Liberal Democrats or Greens.

Gower has voted Labour in every general and devolved electoral contest from 1909 to 2010. In 2015, the Conservatives’ Byron Davies was elected to represent the seat. Corbyn’s Labour managed to regain the seat two years later, but his party suffered a setback in 2019, when Tonia Antoniazzi’s Westminster majority fell to 4.1%. Some recent opinion polling data has also suggested that Gower could turn blue on 6 May, based on a uniform swing from Labour to the Tories.

Before the 2019 Brexit election, Wrexham had never elected a Conservative MP since the seat was created in 1918. But Sarah Atherton’s success in the North Wales seat may come as an even greater shock, given that the Tories finished third in the town in the 2007 Senedd election.

In 1997, Boris Johnson unsuccessfully stood as the Conservative candidate in Clwyd South. The current Prime Minister received just 23.1% of the vote and trailed behind Labour by more than 13,000. Nonetheless, in 2019, Johnson finally managed to claim victory in the seat, when Simon Baynes defeated Susan Elan Jones with a majority of 3.4%.

The Valleys town was won by Plaid Cymru in 2016 when the party’s then-leader, Leanne Wood, overturned an enormous 33.6% majority to defeat Leighton Andrews. In Westminster, Labour’s Chris Bryant continues to represent Rhondda. However, in 2019 the Conservatives managed to outflank Plaid Cymru to finish in a distant second place.

Labour may have held Newport West in 2016 with a considerable majority, but come 2024, and it will be a marginal contest between Boris Johnson and Sir Keir Starmer. In 2019, Labour’s majority here in the General Election was reduced to just 2.1%. The Brexit Party’s Cameron Edwards, now a candidate for Abolish the Welsh Assembly in Swansea, won 4% of the vote.

Labour’s 15.4% majority may look insurmountable, but in the 2019 election, voters in Delyn elected the Conservative candidate, Rob Roberts, as their MP with a majority of 2.3%. Roberts has since been “strongly rebuked” by the Tory Party following an investigation into sexually suggestive messages sent to an intern.

Similarly to Delyn, voters in Bridgend shocked everyone by voting Conservative in the 2019 General Election. The Mid Glamorgan constituency had previously been represented by Carwyn Jones, Wales’ third First Minister, since 1999. Jones will not be standing for re-election on 6 May.

Alyn and Deeside was the Welsh equivalent of Hartlepool for CCHQ in the 2019 General Election; Brexit-backing but out of reach. This conclusion may have been made, in part at least, because of Labour’s enormous victory in the seat in the last Assembly election. Nonetheless, Johnson’s Conservatives slashed Labour’s lead in 2019 to just 0.5%. Given that the Brexit Party received 6.2% of the vote, the Welsh Conservatives will hope to make significant inroads on 6 May.

The Powys constituency is a bell-wether seat in Wales between the Liberal Democrats and the Conservatives in Westminster elections. In 2019, residents were asked to elect their MP twice. On the first occasion, the Remain Alliance and a fragmented pro-Brexit vote ensured that the now-leader of the Welsh Liberal Democrats, Jane Dodds, edged past Byron Davies. Just months later, with no Brexit Party candidate in town, the Tories re-gained-gained the seat with a majority of 17.5%. However, in Cardiff Bay, the Liberal Democrats have held the seat since the first electoral contest in 1999. The seat was held by Kirsty Williams, the Welsh Education Secretary who has propped up Drakeford’s Government, but she is standing down and will be replaced as a candidate by William Powell.

Adam Price is currently sitting on an 8,700 majority in the West Wales constituency that he has represented in both Westminster and Cardiff Bay. But in 2019, Plaid Cymru’s Jonathan Edwards, who was recently suspended from the party after receiving a police caution for domestic assault, only just managed to fend off his Conservative challenger, returning to Westminster with a reduced majority of 4.4%.

Target for: Conservatives and Labour

Readers may be wondering why a seat with a majority of 38% is even being considered to be a seat to watch on 6 May. But a lot has changed in the Anglesey constituency since they last voted in the Senedd election of 2016. For one thing, UKIP, who finished third in 2016, are now all but consigned to the electoral wilderness. More importantly, however, the seat voted Conservative in the 2019 General Election. It will be a long shot for the Tories to replicate Virginia Crosbie’s success, but the seat may yet tell us more about the three-way contest between Labour, Plaid Cymru and the Conservative Party.

The d’Hondt system means Labour will not pick up many seats in the 20 available on the regional ballots.

In contrast, Plaid Cymru and the Conservatives could pick up around half-a-dozen seats each outside of their 40 constituency contests.

But the party to look out for in the regional list is the Abolish the Welsh Assembly Party. Abolish will hope to emulate the success of UKIP in 2016 to elect between 2 and 5 members in the five electoral regions in Wales.

According to opinion polls, the likelihood that the Greens will elect their first Welsh Assembly Member remains slim and neither UKIP nor Reform UK look set to retain any of their seats in Cardiff Bay come election day.

Is the Tory ‘Blue Wall’ really starting to crumble?

Cummings might sound bitter, but Number 10 should not underestimate a...